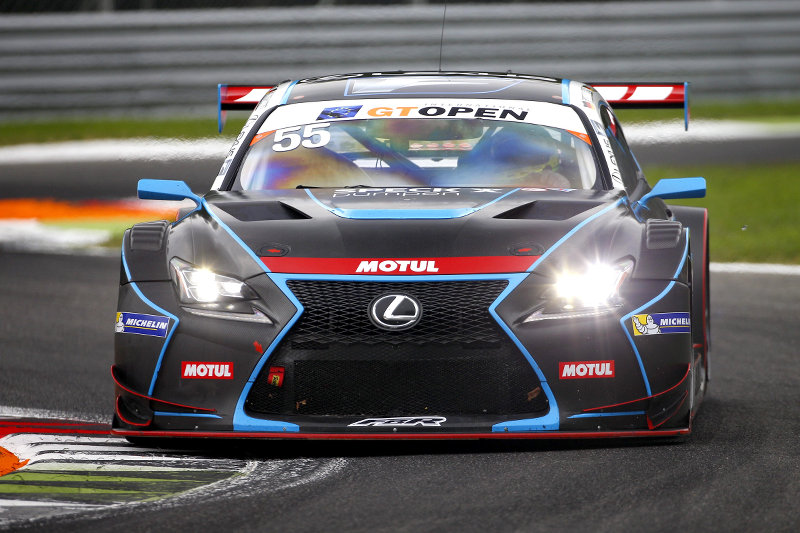 On the past weekend Farnbacher Racing started again with its Lexus RC-F GT3 at the International GT Open. After managing a good start at the Autodromo Nazionale Monza the team from Lichtenau, Germany, ran out of luck.

Farnbacher Racing hadn’t arrived with the highest hopes for the penultimate two races at the International GT Open in Monza. All the bigger was the delight when Mario Farnbacher was able to place the Lexus RC-F GT3 on 7th position in the starting grid on Saturday.

This good starting position encouraged both Farnbacher brothers and they went optimistically into the first run on Saturday. But the good mood lastet only a short while. Mario Farnbacher managed to start off really well and placed the Lexus on 4th position after the start. A little later though he got caught between two Lamborghini – an incident that warped the tie rod front right. Mario could still keep going but he lost some positions due to not being able to keep up the speed after the damage.

After half of the race Dominik Farnbacher took over the wheel and he didn’t only have to cope with the warped tie rod but also had major trouble with the ABS and the breaks. Just as he tried to overtake a lapped car those trouble hit home. Farnbacher wasn’t able to steer the car anymore when he tapped the brakes, he touched the car in front of him and turned it around. To make matters worse a competitor from behind shoved the Lexus into the lapped car in front. The collision caused the Lexus’s wheel suspension front right to break. This finished the race early for the team.

Unfortunately the steering gear of the Lexus got ruptured in this incident as well and Farnbacher Racing had not taken the spare parts to Monza to repair this damage. Therefore the team led by Horst Farnbacher was not able to compete in the Sunday race.

Dominik Farnbacher:
“We had a good start into the weekend and also were not too far off in terms of speed. This makes the result all the more disappointing. But we’re going to repair the Lexus in the meantime and we also look forward to the season finale at the end of October in Barcelona.”

The last two races of the International GT Open take place at the 28th-29th of October at the Circuit de Catalunya, Barcelona.